This story is reprinted from the Valley Voices section of The Fresno Bee as written by Dr. Kris Clarke, associate professor in the Department of Social Work Education. Originally published October 20, 2016. 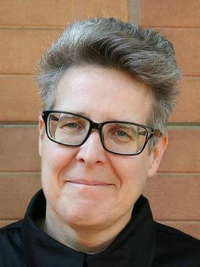 I grew up Fresno and fled at 18. While the social and political culture felt oppressive (especially to an existentialist queer teenager), back in 1980, the city still functioned rather well. No one went through your garbage at night and there were few empty shops, unlike the ghost strip malls that line many main avenues today.

I returned three decades later with a new perspective on my hometown and how it treats its citizens.

What changed my mind was immigrating to Finland at age 24. During my 22 years there, I experienced a welfare society that strove to support social cohesion through robust public institutions and mutual solidarity. Instead of each person pulling herself up by her bootstraps, everyone was included in the national health system; all mothers and babies attended the same maternal health centers. There was a high level of trust in the police and the government.

When I became the representative of Finland in the European Union Project on AIDS & Mobility, I learned more about how European societies worked with difficult social issues, such as drug use, HIV transmission and migration. Rather than trying to reduce drug use, Finland and other countries aimed for “harm reduction,” helping users to lead healthier lives, and to reduce the side effects of injection drug use like HIV, hepatitis C and bacterial infections from shared needles.

When I returned to Fresno in 2007, drug use was high. By 2008 the county was sending people to drug and alcohol treatment programs – often court mandated – at twice the rate of California as a whole.

I visited the Fresno Needle Exchange, and what I found shocked me. Instead of the orderly clinics with services that I knew from Europe, an old school bus housing a mobile medical clinic was parked at the side of a dead-end road and the needle exchange was on the sidewalk.

Maybe the city could likewise start to reimagine itself as one where the tremendous energy and compassion of citizens, and their capacity to care deeply for one another is given more support, so they in turn can support the city as it grows.

Over the past 22 years, Fresno’s needle exchange has gone in and out of legality. The Fresno County Board of Supervisors last outlawed it in 2011, saying it “enabled” drug use. But later that year Gov. Jerry Brown signed two bills that legalized all exchanges in California, as well as permitting pharmacies to sell syringes, on the grounds that reducing the harm of needles is proven to limit the spread of HIV and hepatitis C. The ongoing legal tussle has kept the exchange, which is staffed by volunteers, from getting a permanent home and offering more services.

I began volunteering at the needle exchange and eventually conducted 33 long interviews with clients for academic research. All of my interviewees had found their way to the needle exchange through word of mouth. Here they were not treated, as a homeless woman said, as “a gutter person.”

The volunteers and the doctor at the exchange created a safe space for drug users to imagine new lives. For some this first act of caring for themselves – using a clean needle each and every time they injected – led down the path to recovery. During this time, I was teaching a master’s degree class in social work at Fresno State and learned that one of my students had come through the exchange on her way to sobriety. She said that learning to care for herself at the exchange led to a belief that she too could be somebody.

Many of my informants had traumatic childhoods marked by alcoholic parents, poverty and abuse. A growing body of research indicates that trauma and stressful incidents may be significant factors in chemical dependency. Yet, none of the informants blamed anyone but themselves for their situations.

During my decades away, Fresno changed: It now ranks last among California’s 10 largest cities for life expectancy, median income and educational attainment. Social and health services are stretched to their limits. The dominant ideology is still that people should pull themselves up and face the consequences of their own poor choices.

My time in Finland helped me imagine an alternate Fresno, where people were not trapped in their dysfunctional families, or found the strength and means to leave an abusive relationship, or got counseling for grief after a divorce. Could more social services and a different ideology change life in Fresno?

Maybe the city could likewise start to reimagine itself as one where the tremendous energy and compassion of citizens, and their capacity to care deeply for one another, is given more support so they in turn can support the city as it grows.

Join Clarke tomorrow night for the California Wellness Foundation’s community conversation “Are Valley communities giving up on government?” at 6:30 p.m., Oct. 25 at Frank Places at Warnors Center (1432 Fulton St.). Clarke will be among the panelists that include other community leaders. The event is part of a Zócalo Public Square inquiry into what makes a healthy neighborhood in the heart of the Central Valley. Learn more.