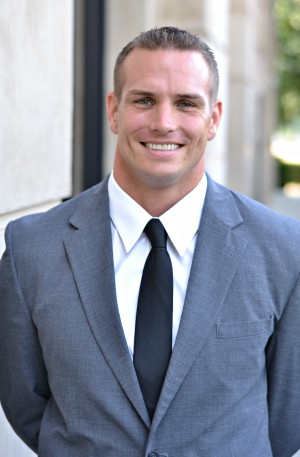 Transitioning into a different career path can be a scary and life-changing process. For 2005 Recreation Administration alumnus, Stephen Spach, leaving the National Football League for a career in finance was a gamble, but one that proved to be worth the risk.

These days, Spach is determined to give back to Fresno State, by sharing his experiences and expertise with up-and-coming students in the field.

On October 24th, he gathered a panel of experts in the field of finance, business and sports, to join him for workshop, entitled “The Professional Mindset: Journeying from Student to Leader”.

The goal of the event was to prepare CHHS students for their future careers. Spach gave advice on how to seize opportunities, manage money/budgets, and how to have a rewarding transition from being a student to a top dog in the  professional world.

“From a career perspective, it widens your gaze to see things from the micro and macro perspective simultaneously,” Spach said. “It allows you to have some empathy for those in different roles in an organization, thus helping your working relationships. On a personal level, that knowledge and perspective will strengthen your competence in the workplace, as well as your own self-awareness and self-confidence.”

For nearly eight years, Spach – a former Fresno State football player – played professional football with the NFL, with teams like the St. Louis Rams, Arizona Cardinals, New England Patriots and Philadelphia Eagles. With his first child on the way, Spach eventually decided to leave the game in 2012 to focus on himself and his family.

He said the tough physical nature of the sport also took a toll on his body.

“Sometimes I miss playing, but overall it was the best decision for myself and my family,” Spach said.

Nearing the end of his football career, Spach took notice of how little financial education and guidance there was for himself and his football colleagues. At the time, he made it his mission to learn more.

“I set out educating myself through various programs offered through the NFL,” Spach said. “The more I learned, the more interesting it all became.”

Later, Spach met partners with the Thiesen Dueker Financial Consulting Group, who were also former Bulldog players, and as fate would have it – found his new career path. He has now been with the company since 2013 as an associate and LPL financial consultant.

For Spach, tackling challenges and embracing opportunities have defined his career thus far and it’s a message he shared with the audience of Fresno State students.

“Have an image of where you would like to be in your future and begin taking the steps to get there. Start NOW, and learn to deal with the failures and rejections as well as the successes,” Spach shared with the students.

Providing a workshop like this for college students is personal for Spach, who recalls being an audience member himself for many professional panels when he was a student from 2000-2005.

“I wanted to create a similar environment for Fresno State students to see professionals that have valuable experience to share – people who have been students themselves – and hopefully be inspired in some way to find success in their own lives,” he said.

“It’s cliché, but the journey doesn’t end and never will. I’m still learning and open to learning every single day. That’s one of the reasons I want to host these professional panels. I want to learn from the panelists too! I love to challenge the status quo, and find both new ideas and more efficient ways to execute and improve the traditional ones.”

Aside from his financial career, Spach serves on the Men’s Leadership Council for the Marjaree Mason Center, which supports and shelters victims of domestic violence, and has participated in the Garth Brooks’ Teammates for Kids program since 2009. The program partners with professional athletes to help children through health and education programs in hospitals, inner city, and underprivileged schools.

As a former student and now proud alumnus, Spach has taken what he has learned from Fresno State and applied it to his life on and off the field. Growing up locally, Spach truly considers himself to be “Bulldog Born, Bulldog Bred”. His pride from being a Fresno State graduate and student-athlete alumni is now deeply rooted in his desire to  give back.

“I always wanted a college education, and desperately wanted to play college football,” Spach said. “Fresno State gave me the opportunity to do both as a walk-on here, and even earn my scholarship through my play. I really embraced the chip-on-the-shoulder mentality that we had on the football team under Pat Hill, and I think that resonates with the people here in Fresno. I think there is something special about this community and the University embodies the feeling.”