Skip to content
Date: September 23, 2014Author: fresnostatechhs 1 Comment
Dr. Scott Sailor has an interesting opponent in his bid for president of the National Athletic Trainers’ Association (NATA). It happens to be his former professor and Fresno State alumnus, Dr. Russell Richardson.

NATA is comprised of 40,000+ athletic trainers from across the nation, so to have two Fresno State alums as presidential candidates adds a unique hometown twist, said Sailor. In addition to being on the NATA Board of Directors for the past six years, Sailor is currently chair of the Department of Kinesiology – including serving as director of the athletic training education program.

Richardson is currently an athletic trainer and associate professor at the University of Montana-Western which is also where he earned his bachelor’s degree. In 1984, he obtained his master’s degree in physical education from Fresno State. He held the position of head athletic trainer at Kings River College (now known as Reedley College), while he was completing his master’s and for several years afterwards. Sailor was his student during that time. 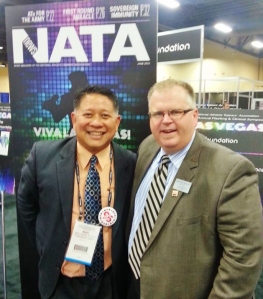 Sailor says running against his former professor is a neat experience. “We have been friends for nearly 30 years. I have a tremendous respect for Russ. He is a really terrific person.”

“Scott and I have been giving each other a lot of grief throughout the election,” Richardson said with a laugh. “I have asked him if he thinks the voters will choose the professor or his student?”

Sailor originally became a member of NATA while he was a budding student at Fresno State, eager to learn more about the athletic training field and integrate himself with professionals in the field.

Joining NATA was the perfect opportunity for him, as it is the only existing professional membership organization for athletic trainers nationwide.

“I’ve always felt a responsibility to the athletic training profession, to give back somehow,” Sailor says. “Being a part of NATA is something that I find very rewarding.”

Sailor ended up doing more than just give back. Since 1985, he has not only served on the NATA Public Relations Committee, but later went on to serve as chair. He most recently served as director of District Eight, which represents California, Hawaii and Nevada; and is comprised of 2,500 members – one of the largest of the 10 districts within NATA.

Russell, meanwhile, was formerly director of District 10. Both men learned they were selected as the two presidential candidates at the national NATA meeting, held this past June in Indianapolis, IN.

”I am very honored to have been selected as one of the two final candidates for the Association to choose from,” said Sailor. “There were five initial nominees presented to the nomination committee and I consider each of them friends and colleagues. I know any one of us would have been a good choice.”

If Sailor becomes president, he plans to work toward making athletic trainers more accessible to the general population and 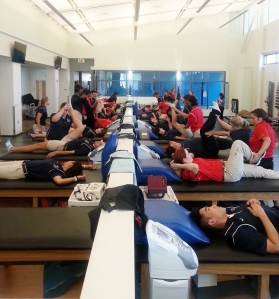 to increase awareness of athletic training, as a whole. “I believe we will soon see a day where athletic trainers are fully engaged and leading health policy discussions, especially when it comes to topics related to youth sports safety,” Sailor recently told NATA’s Convention Daily Newspaper.

“I think the greatest thing about this whole election is that Russ and I are both currently teaching at the schools where we originally learned to be athletic trainers,” Sailor said. “In a way, it feels as though we went full circle. Now we both have the opportunity to potentially serve as president of NATA, right here at home.”

Richardson echoed Sailor’s sentiment. “The best part of this entire endeavor is that a Bulldog will be the next NATA President. If I do lose, then I am at least confident that a good man will at the helm of our Association.”

One thought on “Bulldog Alums Vie for NATA Presidential Title”