When Karina Ortega walks across the stage at the Save Mart Center to earn her bachelor’s degree in social work later this month, she is not only doing it for herself, but for her family and the many generations that will follow in her humble, but powerful, footsteps.

As the proud daughter of Mexican immigrants, Ortega will be the first in her family to earn a college degree from a four-year university – an accomplishment she considers a privilege above all else. She credits her close family relationship, friendships and faith for helping her achieve many of her academic goals, and says through their love and guidance she was able to thrive and put her education first.

“I come from a humble background of hard-workers who sacrificed so much just to have the opportunity of a better life in the U.S.,” Ortega said. “My journey has given me a nuanced understanding of what many Central Valley families go through and particularly how young children are caught between two worlds. I want to help them believe in themselves, create a safe space to talk about mental health and family issues, and remind them to never be ashamed of who they are, but rather celebrate and highlight their special attributes.”

Ortega will not just add ‘first-generation’ graduate to her title. She also holds the distinction of being the 2022 Undergraduate Dean’s Medalist for the college – the highest academic honor bestowed to an undergraduate student within the college. For the 4.0 GPA student, this honor was derived from many years of hard work and pure passion for the social work profession.

Growing up in southwest Fresno, Ortega saw firsthand the challenges faced by marginalized communities. From a young age, her family installed in her the lesson and desire to always help others. She said those lessons carried her all the way to Fresno State, where she was inspired to pursue the social work pathway with the goal of being in a career that allows her to serve vulnerable communities.

“Karina’s story embodies a success story, like a phoenix rising from the ashes from the struggles to success, despite all the adversities placed in her path,” said Dr. Dheeshana Jayasundara, professor in the Department of Social Work Education. “She is a caring and natural advocate, who is passionate about helping vulnerable and oppressed populations. She will make an excellent social worker.”

During the beginning of Ortega’s second year at Fresno State, she faced many challenges in her personal and family life brought on by the COVID-19 pandemic. Throughout her own hardships and mental health struggles, Ortega never lost sight of her desire to help others. In fact, she sought to bring joy to others.

In fall of 2021, Ortega played an integral role in the “Bulldogs Joyful Together” event, organized by the Social Work Student Association, where Ortega served as historian. The event was in partnership with President Saúl Jiménez-Sandoval and the Fresno State Alegria Mental Health Task Force.

Ortega helped coordinate the event, including writing proposals and developing fundraising efforts. She said that after batting a difficult year herself, giving back to her fellow bulldogs was a special feeling. 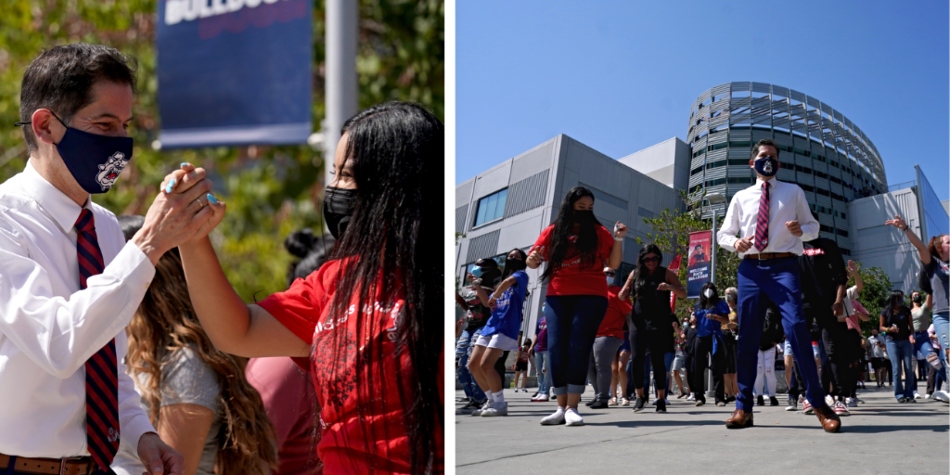 “The goal of the event was to bring a sense of joy and normalcy to the campus community, after a year and a half of virtual learning during the height of the pandemic,” Ortega said. “It was so special to be able to help my fellow students and provide them important mental health resources.”

Outside of campus, Ortega remains equally committed. This past year, she served as an intervention counselor intern at Justin Garza High School in the Central Unified School District. In this capacity, she met individually with up to 60 students who experience hardships related to academic and social success, and facilitated a loss and grief group for students who have experienced the death of a family member or friend.

“Karina has shown the ability to work with several vulnerable populations, including LGBTQ, homeless and foster youth, to name a few,” said Torrie Gill, intervention counselor at Justin Garza High and Ortega’s supervisor. “She brings compassion for others and integrity into her work, and empowers students who are going through transitions in their lives. She is such a great support system.”

As a first-generation college student, Ortega was particularly proud of her role helping to coordinate the inaugural First-Gen INSPIRE Conference in 2019, which was aimed at promoting higher education to over 200 residents in southwest Fresno, where less than 7% of adults have a bachelor’s degree.

“As an alumni of Edison High School, I wanted to inspire students there to shoot for their dreams and to show them that higher education is possible regardless of your financial status,” Ortega said. “We held educational workshops for students and their families to help them with scholarships, budgeting, information on financial aid and the DREAM Act. It was truly a day of empowerment.”

Ortega intends to further her education in the field and will begin the Master of Social Work Program at Fresno State in the fall, where she also hopes to earn her Pupil Personnel Services credential. Her goal is to utilize her advanced experience and education to become a school social worker to hopefully inspire students from Hispanic or minority backgrounds or those who are also first-generation, like herself. She later plans to become a licensed clinical social worker. This will enable her to continue serving the Central Valley region and meet the demands of the diverse families and children that reside in the community she loves.

“I grew up here and have lived in Fresno my entire life,” Ortega said. “I’m proud to embrace the Fresno community, which is why I want to continue working and giving back to this community. Fresno State, in particular, really made sure I had all the resources and tools to give back to my community. The university helped develop my identity as a first-generation Latina in the Central Valley – and that is something I will always be thankful for.”

Karina Ortega was selected as the College of Health and Human Services’ 2022 Undergraduate Deans’ Medalist and is a candidate for the prestigious California State University, Fresno University President’s Medal, which is the highest honor the University presents to an undergraduate student. The President’s Medalist is selected from the nine undergraduate Dean’s Medalists who represent the academic colleges and schools and the Division of Student Affairs. The awardee will be announced on May 19, 2022.