As Peter Lao prepares to graduate with his master’s degree this week, he remains grateful for the individuals that helped forge his future – his former teachers, his professors, his peers and most of all, his family.

Growing up in southeast Fresno, Lao did not have access to many resources, but he succeeded nevertheless. He credits his mother and grandmother, immigrants who survived the Cambodian Genocide, among his biggest influences. Through their love and guidance, Lao was able to thrive and put his education at the forefront.

“I was  the only child and was brought up without a father figure,” Lao said. “But my mom and grandma took great care of me and worked hard everyday to make sure I had the best life possible, so I try to give back as much as I can to them. They are my biggest role models and motivators.” 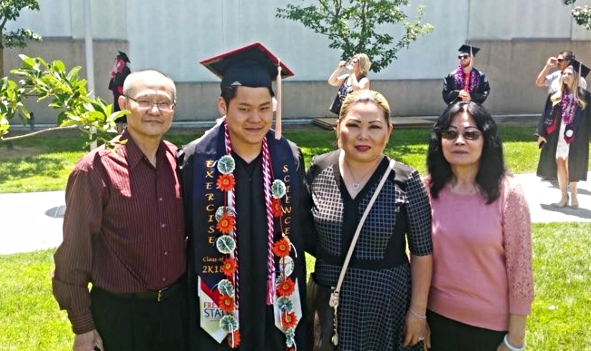 This week, Lao continues to make them proud as he earns his master’s degree in Kinesiology with an option in Exercise Science. He received his bachelor’s degree at Fresno State in the same field in 2018. This time, he does so with a 4.0 GPA and high honors as the CHHS Graduate Dean’s Medalist recipient.

Much like those who paved his way, Lao hopes to do the same for others. Throughout much of his time at Fresno State, Lao has dedicated his time and knowledge toward mentoring and guiding his fellow bulldogs.

He has served as a Supplemental Instructor (SI) leader and mentor through the Fresno State Learning Center for three years, providing tutoring and guidance to undergraduate students who were struggling in the same exercise physiology courses that he once excelled in. He later became a mentor, managing the other SI leaders and helping them to be the best leaders possible.

As a graduate student, Lao also served as an academic mentor for Fresno State Athletics, offering one-on-one tutoring to student-athletes majoring in kinesiology. He says the opportunity to help them build their knowledge and confidence in the classroom was one of his main priorities.

Of his time giving back to fellow students, Lao said,

“I just want people to succeed. They did all the work and I was just there to guide them. Having the resources available on my end, I feel like it wasn’t necessarily a job or something I had to do. It’s something I chose to do.”

Lao’o studies translated over to his master’s thesis, which sought to determine the effects of exercising in hyperthermal environments, for trained and untrained populations. Throughout the past year, Lao and his research team have worked tirelessly to gather data on skin temperature readings, running blood tests and monitoring test subjects exercise in a heated greenhouse. According Dr. Michael Coles, professor in the Department of Kinesiology, Lao’s  research-related work will benefit other researchers in the physiology areas of environment, clinical and exercise.

“From the start of his project to completion, Peter has been able to show his competence in being able to successfully conceive, organize, conduct, and ultimately complete a research project in a fashion that other graduate students should strive to emulate. His ability to work independently and yet still seek guidance and consultation when needed is among the very best,” Coles said.

For someone who initially struggled in the early years of college, getting to this point has been a tremendous journey for Lao. He admits he did not have the best grades or the right mindset his first year at Fresno State, but when he discovered the kinesiology major, his whole outlook changed.

“Before majoring in the field, I had never even heard of kinesiology,” Lao said. “But as soon as I discovered it and started taking classes in exercise physiology and anatomy, I knew I found the perfect fit. After that, it didn’t take much effort to convince me to go to class and study or to get more involved and read textbooks and outside materials to try to get ahead in class.”

In addition to being a student in the kinesiology department, Lao was also an instructor for various Kinesiology Activity Courses, which presented an interesting challenge for him this past semester as his hands-on courses transitioned online due to the COVID-19 pandemic. He had to learn how to navigate the challenging road as both an instructor and a grad student finishing up his thesis.

Going forward, Lao intends to continue his studies in exercise physiology by pursuing a doctoral degree in the same field. His ultimate goal is to one day utilize his knowledge to guide others as a professor of kinesiology. He says Fresno State has has been more than just a school to him.

“Fresno state has been like my home away from home,” Lao said. “I have a big family here with my faculty and fellow students. I wouldn’t be where I am today if this University didn’t give me the opportunity to find that passion and to get multiple jobs on campus. I’m super grateful for all of that.”