The sun crests the mountain range, rising slowly to signal the start of a new day. The jungle nightlife quiets, burrowing away to allow the daytime life a chance to sing. A young 15-year-old Cher Teng (Bee) Yang watches the glowing, Laotian horizon, amazed by the few moments where the night sky coexists with the gleaming promise of the coming day.

In that moment, Yang knew he would do whatever it took to leave the war-torn country of Laos and pursue his dream of teaching. As a child with no formal education and battling through a country decimated by the Vietnam War, the hope of teaching never seemed feasible for him.

Spurred by motivation, Yang followed his dreams and today serves as a full-time lecturer in the Department of Social Work Education at Fresno State, where he has been teaching for the past 17 years. However, getting to this point has not been without challenges.

Yang’s harrowing journey began in 1983, when he was forced to leave his parents and siblings behind in Laos while he escaped the communist government that overtook the country at the time. He spent three months, including many long days and nights, trekking the jungle before ending up at the Ban Vinai Refugee Camp in Thailand.

Meanwhile, the rest of his family escaped to Chieng Kham Refugee Camp. Because he had younger siblings and a large family, Yang felt it was best that he travel separately from his family, as to not draw any more attention to them. After what seemed like a very long two years, Yang eventually reunited with his family in 1985 at the Chieng Kham Camp.

“There were so many emotions involved,” Yang said of their reunion. “When I left, we didn’t know if we would ever see each other again. So when we finally reunited, it felt like I was reborn.”

Yang and his large family of 13 later arrived in the United States, finding solace in the Central Valley. Yang’s new home bordered Sixth Street and Bulldog Lane (just west of Bulldog Stadium). The neighborhood, home to many other Southeast Asian refugees, was notorious at the time for criminal activity, as many of the Southeast Asian gangs derived from that area.

Yang had worked too hard and come too far to fall into a life of crime, so he stayed away and instead, immersed himself in education.

He was excited, yet scared, to begin his educational career at Hoover High School, just down the street from his new home. He spoke very little English and at 18, was older than most of the other students there. He says the lack of respect for teachers and the immaturity of his peers was confusing to him, but he kept his attention towards achieving a higher education.

To escape the gang activity that riddled his neighborhood, Yang would ride his bike everyday after school to Fresno State to study. He eventually earned his high school diploma, along with his three brothers.

In 1991, Yang transferred to Fresno State from Fresno City College, majoring in Psychology. However, over time, he began to disconnect from the major. He says that if he had learned English early on, the material may have been able to keep his interest since the only way for him to completely understand the material was to translate it into Hmong, which proved to be rather difficult.

“By now, I’m struggling at the University,” Yang said. “So I pretty much just spent my time at the tutoring center, the writing lab, and in the library because it was open so late. Doing this caused me to also disconnect from the Hmong community.”

A friend suggested Yang meet with an academic advisor from the Department of Social Work Education. The meeting transformed Yang’s purpose in life and led him on a new, successful path.

“I tell my students that I didn’t find Social Work,” Yang said. “It found me. I immediately connected to the social work theory, concepts and framework. I switched my major from Psychology to Social Work, and was much happier, as a result.”

Yang went on to earn his bachelor’s degree in Social Work in 1994, followed by a master’s degree in the same field just two years later.

Considered a valuable resource in the Hmong community, Yang leads cultural practices and Shaman funeral rituals – both practices that included many years of intense study. Today, he continues his multifaceted career as an educator, but also as the host of his own Hmong TV show, which airs locally on the Hmong TV Network, but also nationally around the world via Youtube.

In September 2019, Yang was honored for his long-standing community work as a recipient of Fresno State’s distinguished 2019 Top Dog Alumni Award for the College of Health and Human Services, in recognition of his contributions to education, the Social Work field and to the Hmong community.

As part of the festivities, Yang was honored on the field at Bulldog Stadium during one of the Fresno State football games and was able to sit with President Joseph I. Castro in the president’s  skybox. From his birds eye view, he was able to look out onto Sixth Street – the very same neighborhood he once grew up in. 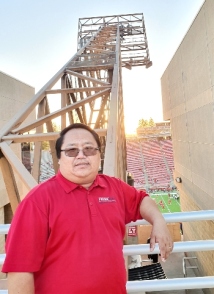 For Yang, it was truly a full circle moment.

“In 1985 when I was still in the refugee camp, my uncle had graduated here [Fresno State] with his master’s and he took a picture of himself on campus,” Yang said. “I saw the stadium in the background and told myself, one day I am going to stand there, too.”