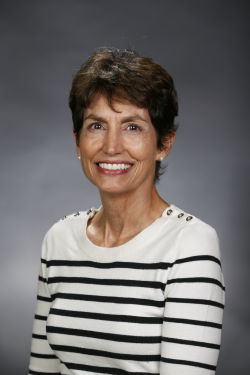 Nominated by: Department of Communicative Sciences and Deaf Studies

Carol Giovacchini’s commitment to the field of Speech-Language Pathology is evident when she speaks. Her voice increases with excitement and pride as she talks about the patients she works with and the students whose externships she oversees at Valley Children’s Healthcare. It is more than a job to her – it’s something she truly loves. As a Speech-Language Pathologist and lead clinician for medical rehabilitation, Giovacchini works with patients, ranging from infancy to age 21, in the area of pediatric brain injury. She has provided diagnostic services and intervention for patients with issues ranging from brain tumors to infectious diseases. She says everyday on the job brings new challenges and opportunities to learn.

Her journey in the field began as a student at Fresno State, where she received her bachelor’s degree in Communicative Sciences and Deaf Studies in 1975. After marrying and having three children, she returned to the University 13 years later in pursuit of her master’s degree, specifically in the area of Speech-Language Pathology. While earning her master’s in 1992, Giovacchini had the opportunity to be a speech therapy intern in the rehabilitation unit at Valley Children’s in 1991 and she has been there ever since. She says that mentoring speech/language therapy externs from Fresno State is her way of giving back to the University she loves. She regularly serves as a guest lecturer and was even an adjunct instructor for a year, teaching introductory anatomy and physiology, and neurology.

After 26 years, Giovacchini is preparing for retirement in 2018. She becomes emotional thinking about all the individuals she’s worked alongside, all the patients and families that have become like family, and the students that will go on to be the next leaders in the field. She know she leaves Valley Children’s in great and capable hands.

The 2017 Health and Human Services Hero Awards, which celebrates heroes from each of the seven departments, as well as centers and institutes within our college, will be held on November 3, 2017 at Fresno State. For more information on the event, contact Beth Wilkinson at 559.278.3603 or bwilkinson@csufresno.edu.