Saving young lives and bringing hope to hundreds of families in crises is no ordinary feat, but for Sean Hunt, it’s just another day on the job in his role as an oncology nurse at Valley Children’s Hospital. Each day he comes across young children in medically fragile conditions and does his best to provide the best, quality care for them and their families.

That’s what he pledged to do when he began his nursing career nearly 12 year ago. He says his journey to the medical field was not by chance.

“This was not something I chose to do,” said Hunt. “God made this my mission in life and said ‘this is where you’re going to be able to touch people’s lives and show your faith.’ I love that I’m able to help people in the midst of the worst storm of their life. It just brings absolute warmth to my heart.”

In addition to his strong faith, Hunt also credits his wife, Emily, also a nurse at Valley Children’s, and his 4 1/2 year old daughter, Skylar, for giving him the motivation to succeed. Despite being a full-time husband and father, nurse and student – Hunt still managed to graduate with a 3.90 G.P.A. – an accomplishment he is very proud of. 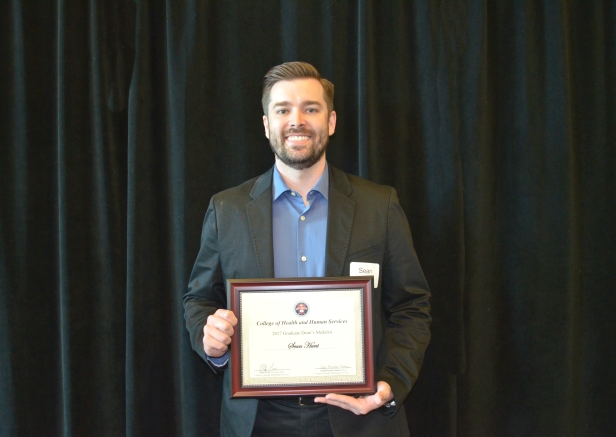 When Hunt began the School of Nursing’s graduate program, he had already been logging in long hours as a nurse, but when the opportunity to become the palliative care coordinator at Valley Children’s opened up, Hunt jumped at the chance. After all, the role would bring him even closer to his goal of helping young children and their families through trying times.

His expanded role also paved the way for his master’s project thesis “The Impact of Concurrent Care for Medically Fragile Children”, which examined programs through local hospice agencies and taking a look at the positive impact it had on improving access to healthcare, while decreasing hospitalizations for these vulnerable children.

“Being in oncology, we deal with medically fragile children all of the time and unfortunately a lot of our kids do not survive their disease process,” said Hunt. “Before concurrent care came about you either had to choose hospice, which a physician would have to certify in six months that they would expect the child to pass away from their condition. The parents had to make it a clear dichotomy of either doing full curative or hospice care. There was not really anything in the middle. With concurrent care, the goal is to decrease the amount of time medically fragile children have to stay in hospitals, thereby increasing their quality of life.”

When Hunt talks about concurrent care and his patients, his passion is evident in his voice – strong and unwavering. It is clear that for him, this is much more than a job. It is his life’s calling.

In going forth with his master’s project, Hunt faced setbacks along the way. Due to the sensitive nature of the project, he was required to receive approval from the Institutional Review Board for the School of Nursing, as well as Kaweah Delta and Valley Children’s, which he received.

He then went on to review a 24-month study that looked at 12 months pre-enrollment in concurrent care and 12-months post to look at the number of ER visits and hospitalizations and length of stay associated with it.

“I wanted to see if we are really making strides with these kids,” said Hunt. “I recently got my data pulled and the numbers are staggering. We were able to reduce ER visits by 75 percent, hospitalizations were down 68 percent and the length of stay was reduced by 85 percent with a group of 25 kids.

For kids to be at home with their family in an environment that is comfortable for them all while getting the care they deserve is huge. We are there from the get go all the way through. We want to be able to support families through the whole process.”

Hunt’s dedication to palliative care earned him job offers as an advanced practice nurse in both private practice and on the specialty service. This comes as no surprise to Dr. Terea Giannetta, a professor in the School of Nursing and Hunt’s longtime mentor.

“His compassionate care and willingness to tackle difficult topics makes him a champion for the children and families of the Central Valley who have this unique need for end-of-life care,” said Giannetta. “Sean is a disciplined and skilled and as such, will be a dedicated Pediatric Nurse Practitioner.”

From a young age, growing up in Visalia, Hunt knew that a career in nursing was the path he was meant to take. Having excelled in math and science at Golden West High School, he decided to attend Visalia Adult School after graduating, where he would later receive his certification to become a licensed vocational nurse.

Hunt later attended Fresno State, earning his bachelor’s degree in Nursing in 2014. He returned to pursue his master’s degree in nursing with a specialization as a primary care nurse practitioner. Being a bulldog runs in the family for Sean whose wife, Emily, also went through the same nursing program and mother-in-law, Bobbi Mueller, who actually taught in the School of Nursing. He said their influence in the field was tremendous to his own growth in the field.

Going forward, Hunt plans to apply to a Doctor of Nursing Practice program in the near future – as well as present his project findings to state legislators so that he can continue to be a powerful voice for the most vulnerable.

“That would be cool to just be able to showcase what we’ve been able to do in a small agricultural-based poor socio-economic area and say that it can be done across the nation,” said Hunt. “Someone has to be bold enough to say ‘let’s have a conversation and see what we can do to help kids’.”

Hunt also hopes to reproduce their work on concurrent care with Tulare County, and eventually across every county in the state.

Hunt, who now resides in Clovis, is proud to call the Central Valley his home and is eager to stay and serve local.

“I’ve been here my entire life,” said Hunt. “I really appreciate what Fresno State has given me with their great academics and their ability to work with students and just create a safe environment that allows everybody the opportunity to learn and grow as much as they can. Every single day, it just brings me joy to know that people who work hard are able to find jobs and stay here – and foster and grow Fresno State.”