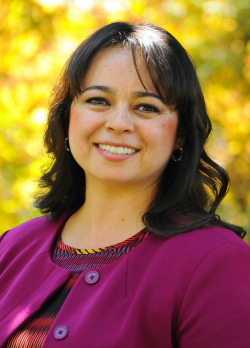 Nominated by: The Department of Public Health

Personal hero: “My father, Jose Maldonado Diaz, who has worked his whole life and sacrificed so much so that he could provide for his six children. He is the most unselfish, caring man I have ever known.”

Strong family roots and a childhood built on humble grounds is the foundation that has shaped Norma Verduzco’s 20-year career with Family Healthcare Network.

She can’t help but see herself in the young client’s waiting anxiously in the waiting room of the Porterville Health Center where just 20 years earlier, she was the one in that seat. When she greets new employees, she remembers the time she got her start at the health center as a front desk receptionist. When struggling families tell her they lack health insurance, she’s reminded of her past and her own family growing up.

Coming from a migrant farm working family, Verduzco and her family grew up without access to health insurance. Because of this, she watched her grandparents pass away of illnesses and she saw firsthand how her parents persevered through their own health struggles. These memories would leave a lasting impact on her and a strong desire to be in a position to provide accessible, quality health care to others in her community.

Verduzco is now able to do that through her role as chief operations officer at Family Healthcare Network, a private nonprofit community-based organization that currently serves 21 locations in Tulare and Kings Counties. As the largest primary care provider in Tulare County, the organization strives to deliver a comprehensive, patient-centered health care delivery model.

When she was just 19, Verduzco began working at Family Healthcare Network as a receptionist at the Porterville Health Center. Throughout the years, she served in various capacities, including cashier clerk, administrative secretary, medical staff coordinator, staff trainer and more.

Among her best memories at the organization was when she was employed as a provider recruiter.

“Being able to reach out and be part of recruiting was very rewarding for me because for every provider that joined Family Healthcare Network, that meant many more patients we’d be able to serve,” Verduzco said.

Working there ignited a spark in her and a thirst to want to learn more and excel to the next level.

As she rose up the ranks at her career and profession, so did her educational pursuits. This would lead to her obtaining her bachelor’s degree in Business Administration with an emphasis in Organizational Leadership, as well as a master’s degree in Public Administration, both from Fresno State.

In 2014, Verduzco graduated from the Blue Shield of California Foundation’s Clinical Leadership Institute, and in 2010 was selected as The George Washington University School of Public Health and Health Services Geiger Gibson Program in Community Health Policy 2010 Emerging Leader Award winner.

While she grew professionally in these aspects of her life, she did so with a growing family at home that included her husband, Carlos, and three sons, all of whom supported her many aspirations.

It is clear that family is her anchor. As Verduzco reflects on her past, she speaks proudly of growing up in Porterville, California, where she would regularly help her parents work in the fields. Whatever was in season, she and her five siblings would go out and pick crops alongside their parents.

Often times, they would be out picking crops all day and head to night classes at Fresno State. For the long drives and late nights, her father would accompany them, waiting for hours in the car while they attended classes. He would then get up early the next day to continue picking crops. It was a simple act to him, but a timeless memory for Verduzco, who is proud to note that each of her siblings pursued higher education and went on to obtain college degrees – some even graduate degrees.

She credits her parents’ diligent work ethic as the driving force of their academic success.

Verduzco’s desire to work in the public health field was ingrained in her the moment she walked into the Porterville Health Center to receive services so many years ago. From there, her passion was set ablaze, leading her to touch the lives of hundreds of Tulare and Kings County residents through her work at Family Healthcare Network.

It’s not just a job to her, but a blessing and most importantly – a privilege.

“The opportunity to be able to make a difference and a positive impact in someone’s life really motivates me to do the work I do for the community,” Verduzco said. “If I can help at least one person receive access to health care, then that is a success to me.”