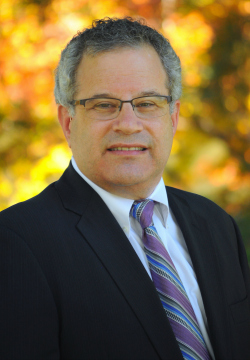 Nominated by: Department of Communicative Disorders and Deaf Studies

Personal hero:“My family, who always made me feel included and never looked at me differently because of my deafness.”

Michael Michner comes from a family of trailblazers, so it would be no question that his destiny would lead him down the same path. Today, he is one of the very few certified public accountants in the U.S. who is deaf.

Born and raised in Fresno, his journey began when he was just 5 months old. Diagnosed as profoundly deaf, Michner’s parents were told that he should be institutionalized and that he would be incapable of real speech until his 21st birthday.

Undeterred and determined, his mother, June Michner, enrolled him in lip reading courses at then Fresno State College, when he was just 2 1/2. As he began classes at a local elementary school, his mother converted a portion of their back patio into an auditory classroom where she worked with him every day to improve his speech.

As the years passed, Michner’s speech improved and he was able to transfer seamlessly to schools within Fresno Unified School District, achieving great success along the way. In fact, with a perfect 4.0 GPA, he was named the 1978 valedictorian of Bullard High School. In front of 10,000 people, he recited the valedictorian address at Bullard’s commencement ceremony, making him the first deaf student to do so.

Afterwards, Michner went on to receive his bachelor’s degree in Business Administration with an emphasis in Accounting Theory and Practice, from California State University, Northridge. He credits his grandfather, Morris Michelson, who owned his own accounting firm, for influencing his love of math and numbers.

His grandfather also inspired something else in Michner – a passion to be of service to others with similar abilities. In 1971, his grandfather donated $40,000 and equipment to Fresno State to start an instructional media center in the Department of Communicative Disorders and Deaf Studies, which is now a part of the Speech, Language and Hearing Clinic. The donation was in memory of Michner’s grandmother, Anna Michelson, who passed away earlier that year.

Michelson was also highly motivated by the persistence of his daughter, June, who tirelessly advocated to find resources for her deaf son, and others in the community, when there were very few available at the time.

But Michelson wasn’t done yet. He went on to recruit two teachers from Chicago, Karen Jensen and Nita Hays, to expand the Deaf Education program at Fresno State, which at the time was the only known one of its kind in the U.S. to provide training programs for teachers of the deaf.

“I am a product of Fresno,” Michner said. “This city has made me the person I am today and it has prepared me to go out into the world and be successful. I want to see Fresno continue to do the same for others.”

Over his lifetime, Michner has served on various boards, including the Board for California Association for Physically Handicapped, now known as the Center for Independent Living; the Fresno Chapter of Self Help for Hard of Hearing People, which he helped create in 1987; and the Fresno United Cerebral Palsy; and the National Association for the Deaf, among many others.

Michner takes great pride in his work as a certified public accountant and the clientele he has accumulated over his 30-year professional career, many of whom are both hearing and deaf. His ability to communicate with his clients and peers has led to his success in the field – and longstanding employment with Public Counsel.

Public Counsel is the nation’s largest non-profit law firm specializing in delivering pro bono legal services, working with major law firms and corporations. Michner, who serves as their finance manager, will celebrate 20 years with the organization in January.

“It’s never an easy road to be a deaf person in a hearing world,” Michner said. “I have never been ashamed of myself for being deaf. I tell people that my hearing loss is just a minor thing and that everyone has a handicap.  There are always obstacles to overcome. Deaf people need to know they are capable of achieving more than they believe.”