Recreation Administration seniors, Cora Cha and Lishen Broten, spent a part of their summer across the globe in the capital city of Taiwan on a once-in-a-lifetime trip where they learned to teach and apply what they’ve learned in a real-world setting. From May 30 thrugh July 30, Cha and Broten served as instructors to the young kids attending the Taipei American School’s day camp. This gave them the unique opportunity to teach American culture to the kids while also taking in the richness of the Taiwanese culture for themselves.

“The Taipei Youth Program Association, which hosted the day camp, wanted American students, like us, to come to their program in order to integrate our two cultures,” Cha said. “They wanted the kids to have an idea of what Americans do at their summer camps.”

Cha and Broten worked as instructors to the students, who ranged from ages 6-12. They worked alongside other instructors and counselors native to the region, who brought their own expertise. However, because Cha and Broten were the only American instructors, their main task was to introduce the Taiwanese students to activities and lessons that take place at American day camps.

Beginning at 9 a.m. each day, Cha and Broten went over the top 10 rules for the campers to follow. Next, the large group of kids broke off into five smaller groups, categorized by age. Each instructor, including Cha and Broten, rotated groups and saw as many as 100 students a day.

Both were tasked with coming up with their own lesson plans and activities for each day’s activities.

“I did various instructing like camp songs, sign language and groovy ice breaker games, as a way to get to know everyone,” Cha said. “We also did arts and crafts, including making t-shirts and paper mâchés. We had free reign to create whatever we wanted to do, while the other instructors who were older and had more experience had specific areas of instruction.”

“On Tuesdays we did ‘run wild’ activities,” Broten said. “We were outside all day with the kids. These activities included water fights, water relays and slip and slide – activities to keep them preoccupied and having a good time.”

This was the first time Fresno State had the opportunity to collaborate on this overseas project. Back in May, the Department of Recreation Administration extended this opportunity to qualified students willing to travel across the globe to explore new cultures and customs, much different from their own.

Brandon Taylor, a faculty member in the recreation administration department, chose Cha and Broten for this opportunity, due to their great academic standing, involvement within the major and their desire to participate.

“Cora and Lishen are both quality students who exemplify the type of students our department attracts and wants to send out into the work environment after graduation,” Taylor said. “Additionally, both had previously traveled out of the country, which helped ease apprehension in taking a major trip.”

Cha described her biggest challenge was maintaining effective communication with the teen counselors of the Taipei American School. Because the counselors once went through the program themselves, they offered a unique perspective in interacting with the current students, but it was Cha and Broten that were able to teach them a few things.

“Sometimes they forgot why they were there, which was to observe and interact with the kids,” Cha said. “Most of time, the counselors did not have previous experience working with kids, so they just needed an example from us of how to do certain things.”

This was an important trip that helped Cha and Broten expand their horizons, personally and professionally. For Cha, teaching was a new a brand new skill for her.

“When were given this opportunity, I did not know that we were going to be instructors,” Cha said. “This experience taught me how to properly instruct a class and how to approach unique situations.”

Broten also had a very good learning experience, while abroad in Taipei.

“I learned better leadership skills, not just with the kids, but also with the bosses,” Broten said. “I learned how to communicate with them about what needs to be done and I was able to better involve myself with the campers, creating relationships and bonds.”

Both feel their experience abroad is beneficial to their future career and academic goals. Cha, studying commercial and event planning, aspires to work with nonprofits and charities in the future on events and programs.  Teaching and creating lessons in Taipei strengthened her skills in that area, she said.

Broten, studying community and youth services, wants to work with kids in the future, following in the footsteps of her mother, who is a longtime teacher. This experience provided her a rare, but special, experience.

“The goal of the project was to provide students with the experience of providing services to diverse communities and populations,” Taylor said. “They were able to plan, implement, and evaluate programs and activities, as well as gain an understanding of other cultures. These aspects of TYPA makes it an ideal location for students to apply the book learning gained through course work into a real work setting.”

Both Cha and Broten have expressed interest in presenting their experiences to other Recreation Administration students in the hopes that increased interest would make it possible to send a larger number of students to Taipei in the future.

“This trip really opened our minds to different experiences and cultures,” Broten said.

To learn more about this opportunity, contact Brandon Taylor at brtaylor@csufresno.edu. 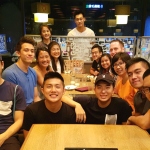 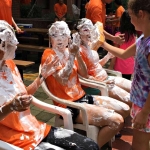