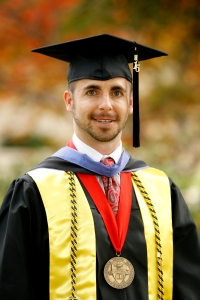 If there is any one student that truly encompasses the core values of Fresno State’s motto of discovery, diversity and distinction, it is Nathan Lee. Personal experiences in his own life, coupled with challenges in adversity, and his passion for his sport – has led to his Master of Arts in Kinesiology, with an option in Sport Psychology. With an impressive overall GPA of 4.0, Mr. Lee has gone above and beyond, continuously leading his peers as an educator, mentor and active member of campus.

Nathan Lee grew up in Paradise, a small town in north Texas. Since he was young enough to remember, horses have always been a part of his life. After all, his parents are two professional equestrians. Naturally they taught Lee to ride horses when he was just 3-years-old. The sport that spanned many generations in his family carried over to him, where he has now been riding for close to 30 years. This experience and passion for the sport was the driving force behind his Master’s thesis.

As part of his thesis, Lee investigated the relationships between mindful self-compassion and pre-competition state anxiety among NCAA women’s equestrian team athletes. His research, which provides a voice to a topic that little is known about, led to him receiving the Outstanding Thesis Award for the Department of Kinesiology.

To gather research for his thesis, Lee worked closely with members of the Fresno State women’s Equestrian team, from 2013-2014. To be able to work with high-level, competitive elite equestrians was beneficial not only to him, but to the athletes as well.

“It was really neat working with these equestrian athletes who have a very rich background in the sport,” says Lee. “Being able to offer them an exciting way of relating to the horse to optimize their performance was very rewarding.”

He hadn’t actually intended to come to Fresno State, but when the unique opportunity to work exclusively with the equestrian team came knocking, Lee knew he couldn’t miss out. He began his academic career at Fresno State in the fall of 2013, having already received a Master of Arts in Counseling Psychology from Prescott College in Arizona. While there, he spent over 1,200 clinical hours working with veterans and children who had traumatic pasts with horses. His ability to work with humans and horses in a therapeutic way garnered his interest to want to learn more about the nervous system in relation to equestrians.

From the start, he left an indelible mark in the eyes of his now Thesis Chair Dr. Jenelle Gilbert, who cites his driven nature and excellence in academia, as the basis to his success.

“He has an unparalleled passion for learning,” says Gilbert. “His thesis is rigorous and is going to make a significant impact on the field, and that is just the first step in his research pipeline. His research on self-compassion, to address anger and shame, will make a significant theoretical and practical contribution to the LGBTQ community and beyond.”

Another passion of Lee’s is the topic of inclusion, specifically among lesbian, gay, bisexual, transgender/transsexual, and questioning (LGBTQ) athletes. This led to his presentation on sexual minorities in sport focused on social implications specific to LGBTQ athletes. As a gay athlete, this particular project proved very meaningful to him, saying that the presentation gave him an “opportunity to reflect and courageously act upon the necessity for visible LGBTQ athletes to serve future generations as role models.”

His profound presentation led to the development of a 3-unit Independent Study graduate course on LGBTQ athletes in sport. He delved headfirst into this course, dedicating his energy and using personal experiences, to compile relevant literature and assignments related to policy and law, including addressing issues of Title IX. His steadfast desire to develop a course related to inclusion and advocacy for LGBTQ athletes is what drives him.

“In a self-compassionate mindset, shame can really empower us,” says Lee, of LGBTQ athletes and individuals. “In some ways we’re disadvantaged with a lot of cultural trauma we experience, but it provides us a great opportunity to come together as a community and be empowered and find that psychological resiliency that really helps us optimize our well-being.”

Outside of the classroom, Lee has made equally impactful contributions through his community service and volunteer work, which he is very passionate about. His most recent work, and one that he is particularly proud of, was working with the Department of Graduate Studies as a graduate writing consultant for the program. In that role, he assisted his fellow graduate students by helping them to obtain useful skills to become better writers. He reflects back on his journey through the program as a great life lesson.

“I went there my first semester and halfway thru next spring, I sent email to [Coordinator] Chuck Radke to tell him I felt like I’d be a good candidate to be a consultant at the studio,” says Lee. “I remember thinking how risky it was since I’m not a great writer, but I felt like I could be a very effective consultant. I was later called in for an interview and immediately felt self-doubt, but I decided to just go for it and take the leap.”

That experience allowed Lee to take a cue from his own thesis, having overcome his own self-doubt to find mindful self-compassion. He says that time in his life serves as a great indication of what his process has been like at Fresno State as a whole.

“It’s been very challenging, but incredibly rewarding,” Lee said with a grin.

It is his helpful nature and dedication to service that speaks to the heart of Lee – and will one day serve as the catalyst to him becoming a successful educator, which is at the top of his career goals. He hopes to teach at the university level, in an area close to his heart – LGBTQ inclusion in sport and mindfulness-based interventions for LGBTQ athletes.

For now, Lee plans to continue his studies with the completion of a Ph.D. in Counseling Psychology on the horizon. He hopes to use the knowledge he’s obtained thus far and with his doctoral studies to practice as a sport psychologist, specializing with equestrian athletes on the psychobiology of performance.

Lee says his graduate experience at Fresno State has been a profound journey, full of enriching opportunities and self-discovery – and the honor of being selected as the Dean’s Medalist is just an added bonus.

“I do show up and I do try to make a difference, and I will continue to do my best to live up to this huge honor.”