Alumni Spotlight Monday is back with 2014 Community Recreation Alumnus Jeremiah Toma, who has been recognized as an Outstanding Part-Time Employee by the City of Fresno Parks, After School, Recreation and Community Services (PARCS) Department. He initially got his start at the City of Fresno while serving as a student intern with the Department of Recreation Administration at Fresno State. He is credited for bringing bold and fresh ideas to the PARCS Program!

Toma has provided leadership and helped write a $30,000 grant for nutritional literacy from the National Recreation and Park Association, The OrganWise Guys Inc. and Walmart. He served as the program coordinator for the grant and was instrumental in incorporating the goals of the OrganWise Guys curriculum into the grant narrative. As part of this grant, Toma was involved with five neighborhood parks during the summer and 14 after school programs in the fall. According to Theresa Milavich, supervisor of Fresno PARCS, Toma’s “quiet pied piper leadership style has infused wellness concepts to over 2,000 children throughout Fresno.”

While at Fresno State, Toma was an instrumental member of the Fresno State Football team, where he played the position of middle linebacker. He incorporated his alma mater into one of his most recent projects, bringing 20 inner city youth to Fresno State to meet with the athletics division. The participants were treated to a fun day of activities, including a tour of the athletic facilities, watching the football players practice, meeting Coach DeRuyter and the team and were supplied a nutritious lunch, followed by a meet and greet with student athletes.

We send a sincere ‘Congratulations’ to Jeremiah – an individual who truly exemplifies our mission to LIVE WELL for Central California! ‪#‎BoldBulldog‬ 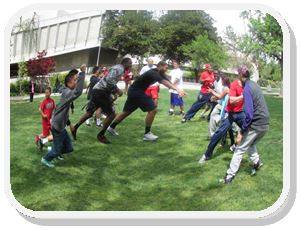