Fresno State Athletics hosted the College of Health and Human Services College Night at the February 14th men’s basketball game against Boise State. Over 150 staff, faculty, alumni, friends and students of the college attended the Valentines Day game. Our Doctor of Physical Therapy students were recognized during the game, and kinesiology student Brett Parichen had the opportunity to make the half-court shot during halftime. The grand prize for making the shot was $1,000 for our college. It turns out Brett didn’t make the elusive shot, but it was a fantastic effort on his part! Connie Clendenan, social work alumna and CEO of Valley Teen Ranch, got to serve as the honorary coach of the night, sitting courtside with the team.

Former men’s basketball player and coach, the legendary Jerry Tarkanian, was also honored during halftime. Tark, as he was known, passed away on February 11 in his hometown of Las Vegas. We are proud to have had him as an alumnus of our kinesiology department, where he received a bachelor’s degree in physical education in 1955.

Overall, it was a great game, with the Bulldogs taking the win over Boise! Thanks to everyone who showed up to the game to root on Fresno State to victory. #Go Dogs! 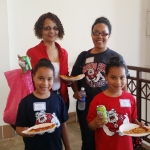 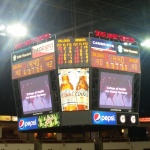 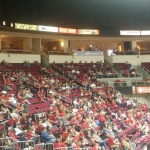 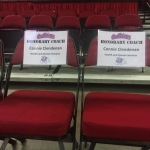 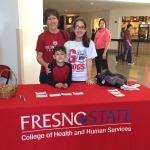