Man buys goat. Goat loves to surf – and together they ride the ocean waves into the sunset of Pismo Beach, California. It sounds like the plotline to a quirky movie, but it is the actual real life story of Fresno State alumnus Dana McGregor and his lovable goat, Goatee.

Yes, Goatee really surfs alongside McGregor and it is a sight that has been wowing local Pismo residents for the past three years. It has even gained them national attention, appearing in National Geographic, NBC’s “Today” show, as well as countless YouTube videos.

The best part of this story is that McGregor has used his sudden exposure to give back and offer a philanthropic hand to others. He is involved in a number of charitable organizations that incorporate his love of surfing (and his goats, of course). But to understand his adventurous life now, one must see where he has come from.

McGregor’s journey began at Fresno State with his first love, soccer. In 1997, he moved from Arroyo Grande, California, where he was a standout soccer player, to Fresno, where he was recruited to play on the Fresno State soccer team. He would go on to play all four years, while also excelling in the classroom as a recreation administration major.

He graduated with an option in leisure studies, receiving his Bachelor of Science degree in 2002. After that, he utilized the skills he learned in school to become a child care worker and supervisor at Valley Teen Ranch (VTR) Madera, an organization dedicated to providing therapeutic and residential care to vulnerable youth.

About two years and a half years into working at VTR, McGregor was playing soccer with the kids when one of them suddenly asked, “Mr. McGregor, why aren’t you playing professional soccer?” It was a simple and innocent question that took McGregor off guard, but changed the course of his life.

“That sparked a realization in me,” said McGregor. “I really had to ask myself why was I not living my dream.”

After his bout with epiphany, McGregor packed up his belongings and began a spiritual journey playing professional soccer that took him all over the world, from as far as Tajikistan, Lebanon, and even to the remote villages of Africa. Sometimes his team would play in front of thousands and others, it was just to a few along the desolate country sides.

To McGregor, soccer was more than a sport. It was life. “I was able to show God’s work and love through the beautiful game of soccer,” he reflected. “It brought everyone together, transcending race, color and socioeconomic status.”

Along Came The Goats

At the age of 29, McGregor officially put away the soccer cleats and retired from playing professional soccer in order to be closer to home and his family. His love of soccer soon transferred over to his love of surfing, where he became a surfing and paddleboard instructor. Goatee would soon come into the picture.

McGregor initially moved back home to Pismo in the aftermath of his parent’s divorce. He needed a simple solution to clear out the weeds and poison oak that had taken over the yard of his parent’s former home. For the solution, he turned to goats.

That is when Goatee came into his life. He bought Goatee for her great weed abatement skills, but was intent on returning her after her task was done. However, that isn’t quite the way things turned out. Pretty soon, Goatee was joining McGregor on walks around the coast and even on car rides for quick trips around town. He soon realized something.

“Having a goat was pretty cool,” he said, with a laugh.

One may wonder, how exactly did Goatee end up on a surfboard, of all places? McGregor says the answer is not as far-fetched as one would imagine. For his birthday that year, his friends asked him what he wanted to do celebrate his big day. McGregor’s answer? Ride the waves with Goatee, of course. So that is exactly what happened.

“We took Goatee out during slow surf at the beach, put her on the board and pushed her gently into the waves,” McGregor reflected. “At first she seemed startled, but she eventually got the hang of it. Goats have amazing balance, and as it turns out, they are very good swimmers as well!”

That was three years ago. Today, McGregor is joined by Pismo the Kid and Grover – Goatee’s kids (pun intended). And if you are wondering, yes, they too, are surfing aficionados just like their mother!

“People trip out,” McGregor said. “It’s just a shock to them to see these goats out in the ocean on surfboards. They realize it’s a goat and they are just amazed.” 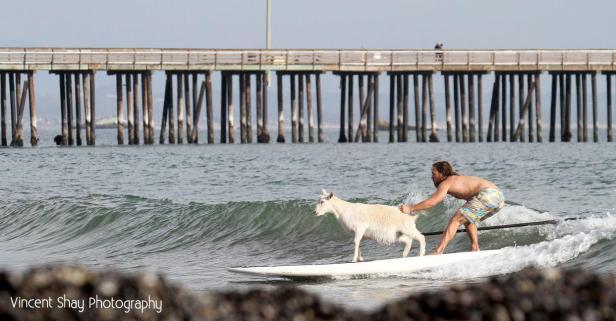 An Opportunity to Give Back

As McGregor got more news exposure for his quirky, but lovable, hobby, he found that it was a great way to raise funds and awareness for causes close to his heart.

Although McGregor displays a spunky, and rather silly, personality when talking about his goats, he is serious about his philanthropic work, saying his passion for helping people aligns with his love of God.

McGregor is involved in a number of projects (through his organization The Surfing Goats of Pismo Beach) that incorporate his love of goats, surfing and soccer. One project he became involved with is “Give a Kid a Kid in Haiti”, which raises funds to purchase a goat (or two) for families in Haiti, where they will provide much-needed nutrition via milk. For example, a donation of $50 buys a goat and $75 buys a goat, plus medical care for the goat. McGregor partners with Ambassadors Football Club, Christian Veterinary Missions and Flo Ministries on the project.

“This project educates people in Haiti on how to their raise goats and treat them right,” said McGregor. “It is a powerful feeling to raise an animal – and this opportunity gives them tools to succeed.”

Through McGregor’s work, The Surfing Goats of Pismo Beach was able to help raise money to buy 17 goats to start a goat farm in Mozambique, thanks to the generous donations of their supporters.

“We get to experience the joy of kids raising their very own goat,” said McGregor. “Goats are just really cool. The milk they reproduce helps families financially because they can sell the milk or make cheese and ice cream out of it, which in turn, they can use to sell or feed their families.”

McGregor is also the founder of SurfSUP camp – a series of surfing and paddle boarding lessons, fun for the whole family or just an individual that wants to learn. As he states on his website, “if you can teach a goat to surf, you can teach anyone to!” Yes, his goats are right there alongside him as he teaches classes.

He hopes to add in a SurfSUP camp for special needs children in the near future. McGregor knows that animals provide great therapy for children, so he hopes that by having goats surfing with the kids, it will provide emotional and physical relief.

“I really love children and I thought this was a great way to connect animals to children that may need healing,” he said. “My goal is to live by my love of people and bring joy. There is nothing like riding the waves and I want everyone to experience that feeling. It is often said that only a surfer truly knows that feeling. It’s very freeing and I want children to experience that.”

As if that wasn’t enough, McGregor wants to share the adventures of Goatee through a children’s book he authored, entitled “The Surfing Goat, Goatee”. It’s a book filled with rhymes and fun stories, meant to share the unlikely story of friendship between man and goat. According to McGregor, the book has received “four hooves up” from his goats! For more information on the book, click here. A release date is pending.

In lieu of all his success, McGregor is quick to mention that he does not do all of this alone. He counts on the support of his many friends, who are surfing/paddle board instructors, soccer players or philanthropists themselves – and of course, his beloved goats. McGregor, a strong man of faith, credits his ability to give back and bring joy to others to his love of God.

“I am simply sharing God’s story through my work.”

One thought on “Dana McGregors’ Surfing Goats Make A Splash”